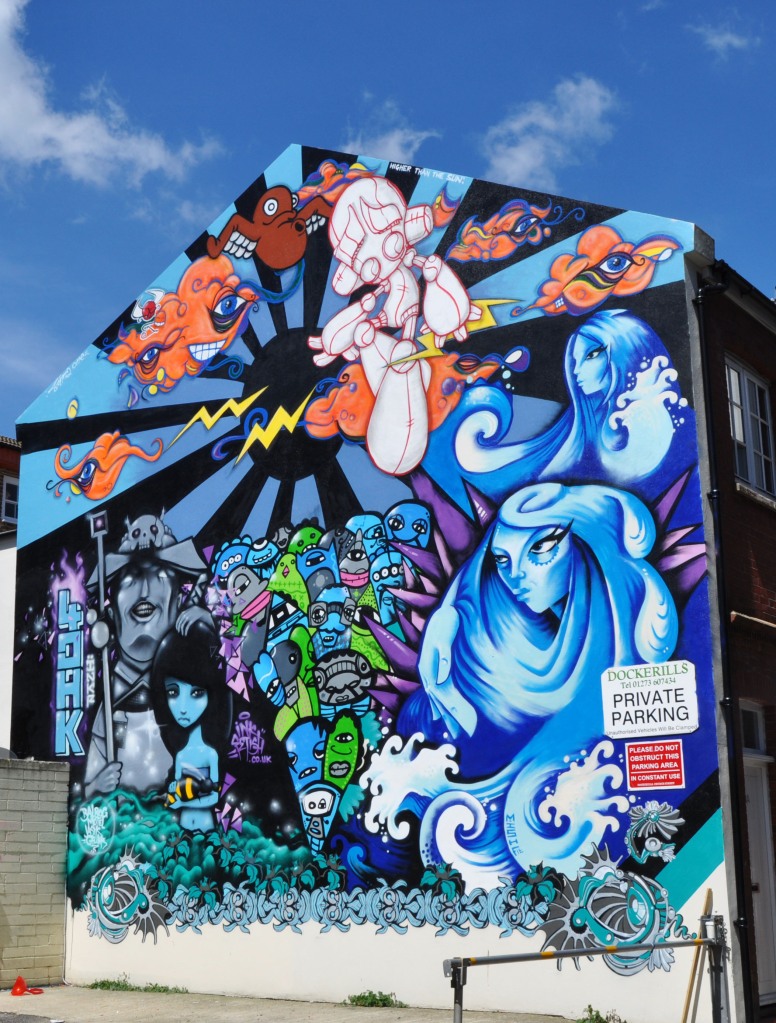 In the past year and a half I have been involved in some of the biggest wall projects that I have ever done. It started in May 2010 with the event The Beautiful and the Canned 2, which was a highlight of 2010’s May Fringe Festival in Brighton and Hove. There were a number of large walls painted around the city by a selection of amazing spray paint and stencil artists. This event was lovingly and meticulously organised by Brighton’s own Guy Harris and Fay Mcdonald at WET PAINT PRODUCTIONS. The wall I was involved with, as seen above, was a collaboration with Brighton’s no.1 female spray artist, MISHFIT, London’s awesome character artist , INKFETISH,  mural cartoonist, KEV MUNDAY and Leamington Spa’s super tech stencilist, DBO. With a special guest appearance by Holland’s (or Nolland) crazy graff cartoonist, NOL getting as high as he always gets ( he is a very tall guy!). This was assisted by Independent Scaffolding of Brighton

In August 2010, I single handedly painted the largest mural I had ever painted. The wall ( as seen above ) took a week to complete, up a scaffold and I probably went through around 50 tins of spray paint. Powered by the mighty KOBRA brand and once again supported and elevated by INDEPENDENT SCAFFOLDING of Brighton, the wall was commissioned by THE  PROPERTY SHOP to promote a new business venture in to home repairs called ALL BUILDING TRADES. The image is the cut away of a house showing lots of building and repairs going on throughout.

This year has seen more large work go up ( see below ) and there are still a few more projects in the pipe line.